By Herb Kean
Originally published in The Tool Shed, Number 127 (June 2003)
How many of you have bought a spill plane and tried to make spills? The odds are that you won't get a really good spill on the as-found plane. What's worse is that from time to time on a plane that originally produced good spills, you end up with lousy ones. Many articles, and also a chapter in a book, have been written about this phenomenon, and I have tuned up spill planes just before a demonstration, but neither the articles, the book, nor I, have found all the secrets that takes it out of the luck category. A couple of obvious things like sharpening the blade, tightening the wedge etc. do not always solve the problem.

When my son Steve asked me to make him a spill plane to show it off to his customers, I told him that I would rather buy one and fumble around trying to get it to work. Making one from scratch looked to be more time consuming. However, I told him I would make one and record the time.

My philosophy has always been, "You learn by doing." I felt most definitely that I would uncover some of the secrets of these planes that up to that time escaped me. I laid out the sketch for the easiest spill plane that I knew of: the two piece model (improved to a three piece model later). I also picked the blade orientation as "flat" to simplify the mortise work. See Figure 1 for the finished plane. Making the plane was relatively easy, and I surprised myself with how little time I spent completing the basics. But, as suspected, it didn't work nearly well enough to suit me. 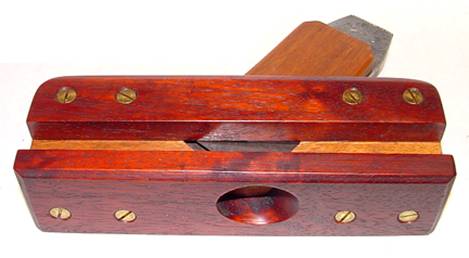 Then came the learning part. I separated out every conceivable variable that existed, and worked on them one by one. As improbable as it appeared, there were fifteen variables that affected the production of a "perfect" spill. See Figure 7 for a tightly-wound, tapered and stiff "perfect" spill. I will list them at the end of the article so as not to muddy up your reading with technical jargon. If you really want to make, or tune up, a spill plane, you can battle through the fifteen points at the end.

After getting my newly made plane to cut great spills, I decided to put the variables to the test. If they were truly meaningful, I should be able to get all five of my other spill planes to work. At the time, two of them worked intermittently, one worked fine, and two didn't work worth a tinker's dam. It took the better part of a morning to apply most of the variables to all those planes. However, I'm happy to say that they now all work. And, the thing that I really feel great about is the fact that the mystery is gone. Almost any configuration plane at a sharply skewed angle works if tuned with the variables! And rightly so, as the people making these planes were rarely professional planemakers and I suspect that very few knew anything about critical compound angles etc. When you follow the rules, you too, with very little concern for accuracy, can make or tune a spill plane. 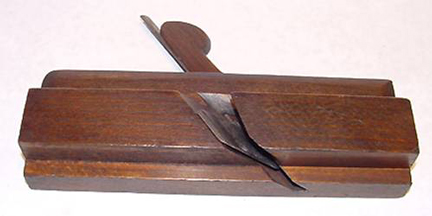 Figure 4. Spill plane with a V-bottom sole and half-eye escapement. 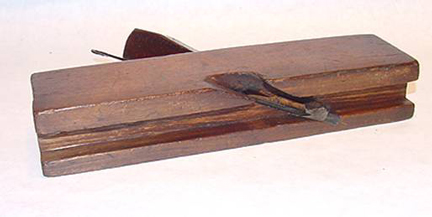 Here are the variables, in no particular order:

Figure 7. Tightly-curled spill ready to light a pipe or candle around the house.

If you really work at trying to understand what makes a spill plane function, almost any configuration will provide you with a decent spill. And a simple but gutsy model like Figure 1, will give you perfect spills for as long as your arms can keep moving.
Afterthought: When Doris proofread this article, her only comment was: "How can anyone get so wound up over a little wooden shaving?" (Opposites definitely attract.)