I met Jim Leamy at the dealer show during a Brown Auction two years ago. I was very impressed with the stunning replica wood planes he had on display. At that time I had just seen a Tidey double beveling plane at the CRAFTS auction and was awed with its complex design. I talked to Jim about this plane and he was kind enough to explain how he made it and how it worked. I recently saw that Jim was featured in Fine Woodworking as one of the best planemakers today. Later when I talked to Leon Kashishian he said that he thought Jim would make a good topic for a Tool Shed article and I agreed. Jim lives in out in the country of Pennsylvania and arranged to meet me at his house for an interview and a session of photography with his handiwork. Herb Kean agreed to also visit Jim and together we had a stimulating tool excursion.

Jim was ready when we arrived and welcomed us with hot coffee and introductions to his wife Rebecca. He had already set out for us a sampling of some of his different planes. As we talked over coffee he explained to me that he grew up locally in Chester Township. He recently retired from the Air Force after thirty years of service, where his job description was "Bomb Disposal." He started collecting Stanley and other metal planes on the west coast where he was stationed. But after moving to the east coast he has developed a love of wooden planes because of their "class and character." 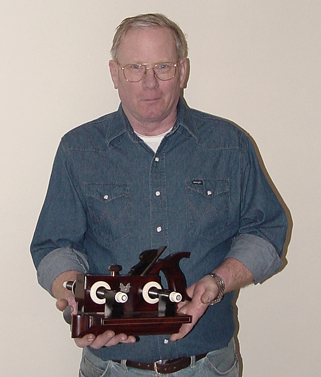 After working for a cabinetmakers shop for a few years, he realized that his woodworking talent blended itself well with his love of collecting wooden planes. Jim decided to start his own business and make some of the most creative wooden planes ever produced. His first planes were made for fun and consisted of three small block planes made of brass and wood. Later he desired a special plane for himself and dove right in and created an ebony plow plane.

Next, he had always admired the Tidey beveling plane and knew he would have a hard time acquiring one. Therefore he made a replica to the exact measurements. Jim exhibited his different creations at dealer shows and was well accepted by collectors who also wanted to order his creations. It was slow at first but as more people got to see his work the more orders he received. Now he works pretty much full time filling the orders he has and designing plans for new creations. Each of his planes usually take over 150 hours to make and that does not account for the original designing phase. His planes fill some of the finest collections in the country. 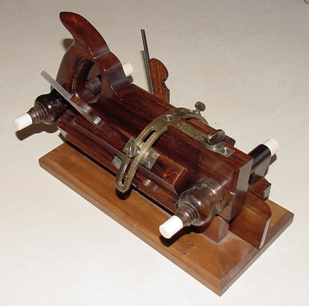 The Tidey double beveling plane is an exact replica of one of the most expensive antique tools ever publicly sold. Jim has seen four of the original planes and all were different in one way or another. Not all of the different planes have the pointy handle or the brass metal inset into the top. There is also an adjuster for the skate to move it up and down to adjust it from the front to the back. Only one version had the ivory tips on it. A nightmare to design as far as the center bridge shape and getting it bent just right. The hinge is complex, and as with other parts tolerances are very tight. As the smaller side planes are swiveled out on a pivot they are also swinging in or out. All the Tidey planes he has made so far have been cocobolo wood and have a lacquer finish. Jim tarnishes the metal to give it the aged look.

The next plane I explored was a beautiful reproduction of a plow plane by William Epperson. It is made of Cuban mahogany and ebony. The wood was beautifully finished with six coats of shellac followed by rubbed oil/varnish. Ivory split nuts and mother of pearl embellish the design. A sterling silver inlay highlighted the wood. An ebony wear strip is dovetailed into the fence's side and an ebony wedge contrasts the mahogany. The intricate designs of the handle demonstrates how he had a certain grace and finesse to all the fine details. Jim feels that the Epperson planes were the most stylish designs of the early planemakers. 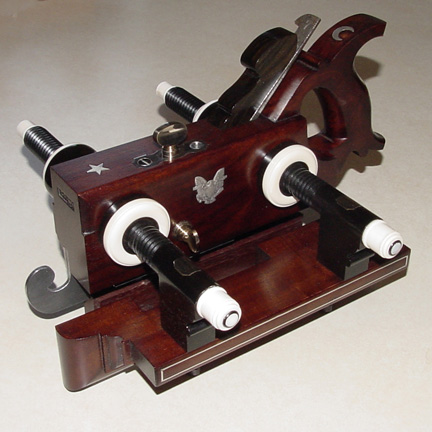 Epperson's plow plane reproduction is Jim's favorite. The silver eagle in its side is cut out from a coin and inset flush.

Next was the E.W. Carpenter handled plow plane. This is an exact reproduction of the original, as he has examined six of these planes he noticed they all had minor differences on each. I felt it was a bulky and very mannish plane, with huge wedges and nuts and large rivets securing the skate. Jim said there are plenty of people in the local area who are students of E.W. Carpenter, and the general consensus is that Carpenter himself was a large man. The uprights are held in place by Madagascar rosewood nuts. The smaller Tidey plane is a 2/3-scale replica made as a whim but turned out to be more difficult to make because you have less tolerances to work with. Jim has only made four of these smaller ones. 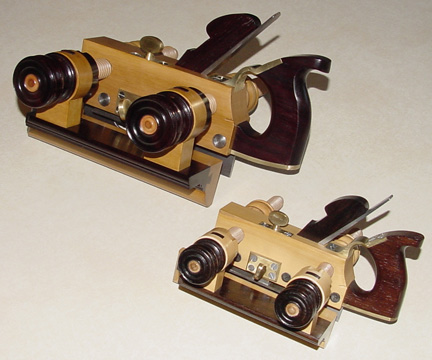 One of the planes Herb was especially interested in seeing was his center-wheel plow designs. Herb was making a reproduction of the original himself and wanted to see what Jim was doing differently. Jim said that his designs are not exact replicas of either of the manufactured designs but rather his idea of how they should have been made. One of the tricks of making this plane is in the initial design of the plane making sure all the parts align properly to prevent binding. The body of these planes looks like a piece of Swiss cheese before you start assembly. This plane was made from a piece of wood that Jim selected especially for this project. It is a spalted piece of wood from the root of a maple tree. Jim says he uses a variety of finishes on this plane design depending on what type of wood he uses. Varnish is difficult to use on rosewood or ebony because of the oils in the wood. 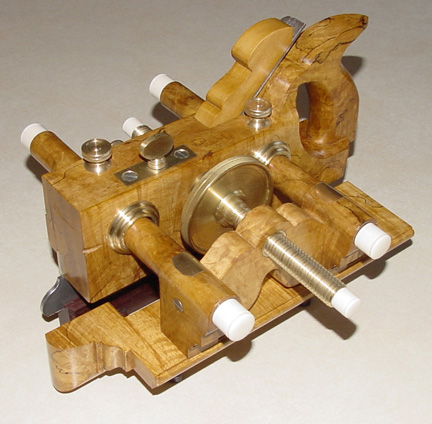 Next we looked at Jim's creation of the McMaster one arm plow plane. There is only one of these original planes in existence and was the most difficult Jim has made to this date. It is an exact reproduction of the original as possible. After making a few of these planes Jim realizes why only one of these planes were ever made. The one singular arm controlling the fence became the weak spot and wore out and broke. It seems it was more of an experimental plane than anything else. Jim did not have access to the original so he had to scale it from pictures, which took several tries. He also had problems finding someone who would cast the metal parts he needed in such small quantities. He does much of the metalworking himself. The arms of these planes are complex and must be worked to a couple of thousandths of an inch or it will not work. They have an internal metal gear that meshes with the external gear seen to move the fence. It takes more time to make the arm than any other part combined. 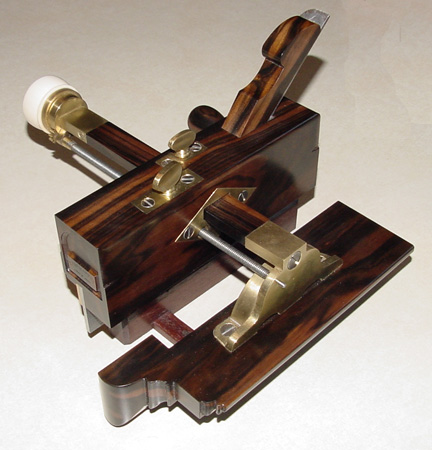 Jim is now working on a Bundy Combination plane, which Jim describes as, "another good idea gone awry." It was made to cut different size tongue and groove joints. But it was way too complex to produce for any practical purposes and normal tongue and groove plane sets prevailed. It is being made of beech wood, birds-eye maple and a cherry main section and handle, as was the original. 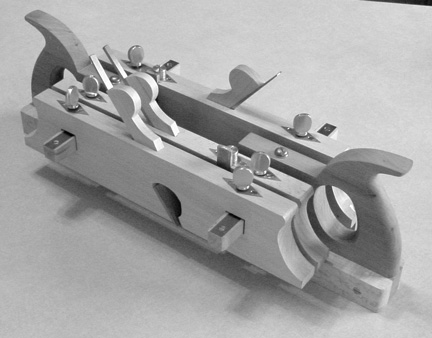 Another recent creation was two ivory replicas of a small English ebony plow plane. Jim said working with ivory is different then working with wood. You have to be careful of it chipping and cracking. Ivory also has growth rings, which behave like grain in wood. It also has to be treated just right or moisture can start to deteriorate it or cause it to crack. 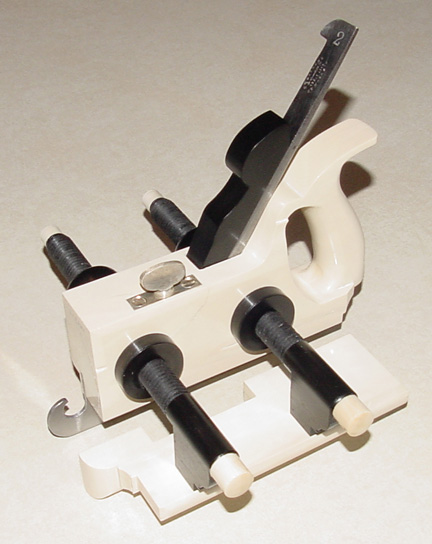 One of two ivory planes made by Jim.

Future plans for Jim include the Montgomery plane that has ivory gears on its top and side. Also Jim has been thinking about making planes in the traditional English infill tradition. Jim showed us his favorite antique plane when he picked out a screw armed handled American sash filletster made from applewood and boxwood, and made by William Ward. I thought that this ancient maker from England, and then later America, would be proud to be recognized by one of his talented peers. The next time you are at a major tool event look for Jim. I am sure he will mesmerize you with his beautiful creations of some of the rarest planes ever made.