I don't remember specifically why or how I began collecting levels. My first levels were real dogs beat up, relatively-modern, common things with broken vials, missing brass and lots of dings. As time wore on my world enlarged a little and I began to find better quality levels, but of the same type and vintage as those that I already had. Actually, my world had enlarged from the Baton Rouge to New Orleans corridor to include the Canton, TX Flea Market and some antique stores and flea markets in northwest Arkansas. Still not exactly the best place to search for levels, but what did I know. Precious little, that's what I knew. Well, after all, I thought that was all that I needed to know.

Slowly my world continued to enlarge and I began to find older and better levels, but for the most part they were still made by Stanley. I didn't believe that anyone else made levels. In truth, I never thought about it. Then there was that first trip to Brimfield. They sold levels there that showed little if any signs of use. Some of them were made of rosewood. They actually used rosewood for levels! I found some rosewood levels with concrete on them too. What a sacrilege!

Somewhere not long ago there was the big Beitler auction: rare levels, brass-bound rosewood levels, strange levels, inclinometers, metal levels with fancy cast iron filigree and gold paint. I was hooked. Collecting wasn't ever going to be the same. For one thing, it was going to be more expensive. I bought 13 pieces in the Beitler auction. Far more than half of those were levels. Then Bob Stanley sold me some of the rare pieces from his collection. Yup, collecting had changed.

I began to acquire every catalog and reprint that I could get my hands on - always interested in the levels that they contained. I looked in auction catalogs. I went everywhere that I could afford and bought everything that I could find, whether I could afford it or not. A lot of strange makers were turning up in my office - like H.M. Poole of Easton, Massachusetts [the partnership of J. & H.M. Poole came first, well before 1850] who made levels of mahogany that were elegant in their simplicity. They are some of the most beautiful pieces of wood that 1 have seen anywhere. H.M. Poole made a lot of levels later with beautiful Cuban mahogany, a heavy, sleek wood with purple highlights, and sometimes used one-sided, double-scalloped brass sideviews. He also used Cuban mahogany with such character that most people mistake it for rosewood. 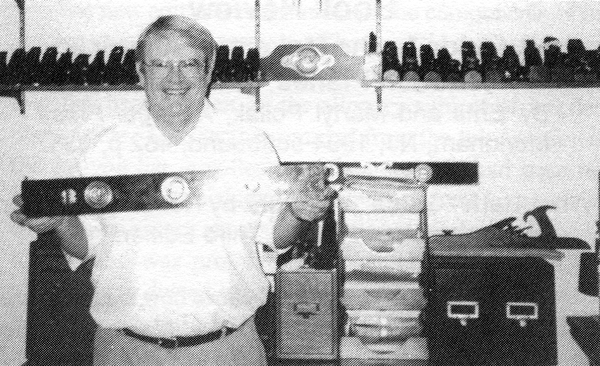 The author holding a 28" cherry Universal Inclinometer by the Federal Tool Co.

Other names were: McCoskrie, Watt, the Lamberts (George & William), Lambert Mulliken and Stackpole, and Mulliken and Stackpole. Now I knew what I was looking for. These things were elegant. Many were very similar to me Pooles' levels, simple but distinctive. The woods were again exotic. Some really were rosewood. Some were a blackish extremely dense wood that resembles ebony, some were a blond wood, somewhat like satinwood or boxwood, and some had German silver fittings. There was a definite Boston style for levels. A little later came Harmon, the Mason Brothers, and many, many more. Slowly it dawned on me that there were whole series of levels put out by these manufacturers, just as by Stanley who was competing with the Boston makers by 1859.

Stanley jumped into the level business just as they got into so many other businesses - they bought a company, Hall and Knapp. I was fascinated by the idea that every level Stanley advertised in 1859 was probably also made by Hall and Knapp during the few brief years of their existence. I still think that's true, and I've tried to collect the whole series of Hall and Knapp levels for that theory.

The level makers in New York and New Jersey were also active in the middle 1800s and some of their levels also tend to have a distinctive style. Others of these levels, particularly those from the later 1800s, tended toward that Stanley look. There is, however, more than sufficient variety and quality to justify collecting these tools.

Stratton Brothers appeared on the scene. Now came the elegant little brass-bound rosewood machinists' levels that are so sought after today. No question about it, Stratton levels were probably, overall, the best wooden levels on the market. Stratton also apparently made some levels for special order. These were standard-pattern oversize levels or standard-size and pattern but of exotic woods such as bird's-eye maple. These special levels are fantastic pieces. A series of patented improvements over the years means that there are dozens of collectible combinations of wood, pattern, length and style.

Then there were the cast iron levels, especially the fancy filigreed levels of L.L. Davis and the Davis patent inclinometer. Like Stratton, these levels were soon recognized as the finest metal levels on the market. Davis made some pretty elegant wooden levels too. He used Cuban mahogany (again often mistaken for rosewood). He used rosewood and mahogany and cherry. His wooden levels, like the metal ones, were produced in two stock sizes referred to as small and large stock or regular and tall form. Davis had his imitators too and this led to a profusion of metal levels of varying quality and style. Patents were issuing fast and furious now. Why things were patentable is not always obvious either. There was some patent infringement also, I suspect. Even the Stratton Bros. name turned up on at least 2 styles of filigreed cast iron levels.

Around the turn of the century, the flood gates opened and men all over the United States began to patent levels. Many of these were gradefinder or inclinometer-type levels. These constitute one of the most collectible classes of "levels" today. The names are familiar to many collectors: Texas Clinometer, Deck Gravity, Protractor Level, Juney's patent, Rowes' patent (a very early one, 1850s, with a plumb bob that was let down with a crank), Gibson, Murray Porter, Challenger (1860s), Helb, and Mellick. This is not intended to be a complete list. There are many others that mystify collectors as to their makers. Some are totally unmarked and won't be identified until an example with a label is located. Some are marked with only the patent date and these await identification for a trip to the library. Many of these patented gadget levels were patented from the Midwest: Iowa, Kansas, Oklahoma, Texas, Ohio, Illinois, and Missouri.

Then there are the sighting levels. Some of them have only a long tube with a pin hole at one end and cross hairs at the other. Some of them have mirrored arrangements. Some of them have glass protective coverings over the holes, and some do not. Some of them are forerunners of the builder's level still used today. Some of them were patented, and some weren't. The O. Hanks patent goes back to the 1840s, for example, and this level is very attractive with its gold trim, adjustable sights, and pivoting pieces. Adding sights to a commercial level was common practice: a piece of brass with a pin hole on one end and a piece with cross hairs on the other end. These had to be carefully made in order for them to function properly. Popup sights appeared on several types of levels. The Wood's patent is among the more interesting mechanisms; most other integral sights for wooden levels were only equipped with a notch for your thumbnail to pull them up. There is great variety in sighting levels and large differences in quality and functionality. 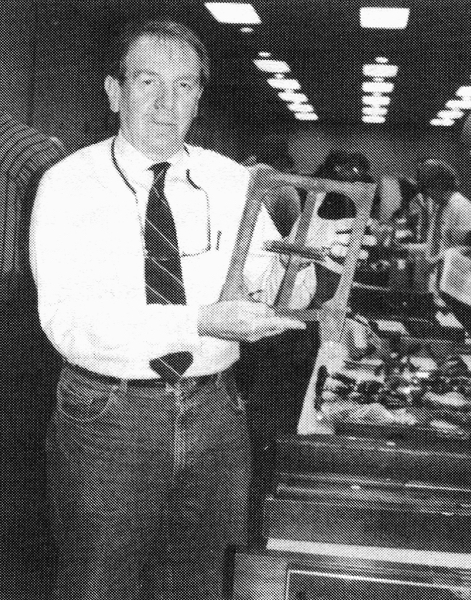 The machinists' levels form another collectible class of levels. They are usually 3 to 12 inches in length and usually made of cast iron or brass. Again, there were several interesting patents, as usual, for adjusting the bubble and sometimes for function. All the major level manufacturers of the late 1800s and early 1900s made one or more machinists' levels, and most were of a style different from the classic Starrett. Some of them, like the Davis levels with their acorn end knobs, were very distinctive. Style differences also included the placement of the vials, such as Davis and Cook, and the triangular shapes favored by a few makers. A few of these levels had provisions for setting a constant angle, such as in the Richardson patent.

The English and the Scottish took level making to new heights. Some of the levels are so gaudy as to be overdone. They made extensive use of ebony, rosewood, ivory, and brass. The English and French seemed to make new special purpose levels at a rate that rivaled the activities in our own Midwest. Some of the English and French levels in my collection require an advanced engineering degree just to set them up, never mind use them. As a class of collectible tools, English, Scottish, and European levels should provide enough variety to satisfy the most curious collector.

Finally I'll stop with a plug for home-made levels. Some of the most beautiful and ingenious levels in my collection are home made. They often feature brass parts from commercial levels but the quality of the wood, of the workmanship and of the imagination are remarkable. Many of them are inlaid with geometric designs or stylized initials of exotic wood. One type of level that lends itself to being craftsman produced is the plumb level, which is a plumb bob and a right triangle with perfectly flat sides. These could be made of any wood that was handy or of brass. There was plenty of variety in the plumb bob too.

Early, craftsman-made levels are often impossible to assign, with certainty, to the craftsman category. Early level makers had the maddening habit of marking their work with no more than a paper label. When that label was lost or became illegible, it was not intrinsically possible to assign the product to a commercial maker. There is nearly endless variety in levels.

A Disston and Morss level made for Sargent and the Morss patent model for it dated March 12, 1878.

We haven't even touched on pocket levels and levels made for use with a rule or square. We haven't discussed some of the later but major producers of levels, such as: Disston and Morss, later Disston, Davis and Cook, Akron, Jennings, Chapin and Chapin Stevens, and many more. We haven't talked about the special qualities of masons' levels, railroad levels, levels with irregularly shaped vials. We've skipped levels with batteries and lights in each porthole. There's a whole category of inventions that might best be called rafter levels. Woods used in levels included ebony, the rosewoods, boxwood, cherry and other fruitwoods, oak, walnut, maple, birch, the mahoganies, etc. There were cast iron, steel, brass, German silver, ivory, bone, celluloid, nickeled metals, and others.

Collecting levels has become quite consuming. I hope I have given you some insight into why I've found this type of tool so interesting. There are as many patents applied to levels are there are for planes. Certainly size, form, and function are also comparable variables; intrinsic beauty of the wood, shapes in the brass, and... there's no end to this!

This article first appeared in the June 1994 Newsletter of the Southwest Tool Collectors. Don Rosebrook, Ph.D., lives in Prairieville, Louisiana. He is a consultant in chemistry and chemical engineering, and seems to have a client in the vicinity of every tool show or auction. He's president of Southwest, a director of Mid-West, and a member of every tool club that he knows of. Don has been collecting levels, plow planes and marking gauges since 1988. But it's levels that are his favorites, and he's planning a book on the history, types and construction of levels.