Who was the first planemaker to come up with a three-arm plow? I am excluding the European three-arms where only two arms go into the body. The concept is not quite the same with these plows. The true three-arm plows such as the Sandusky centerwheel, Ohio centerwheel, Kimberley (English), Brown (Scottish), and Chapin-Rust are all in the latter half of the 19th century and can't be considered as "the first".

Was it Israel White who patented his three-arm plow in 1834 who started the whole thing, or did he get the idea from across the river in New Jersey? Could Andruss, who started planemaking in Newark, New Jersey, in 1821, have dreamed up the technique to keep the fence parallel to the skate? Two other Newark planemakers made early three-arm plows. But White's three-arm plow was already on the market before I. King first appeared in the Newark 1835 Directory and before Mockridge & Francis started making planes in 1835.

As with any mystery, you have to collect the facts first and then put them together so they make some sense. Unfortunately, in this case it's mostly speculation. Yes, you can come up with a different conclusion, but, hopefully, some day someone will come up with some hard evidence.

Let's start with Israel White. We know that the patent paperwork shows only the non-bridle style. In addition to that, a broadside advertising the plane came out in November of 1833 showing only the non-bridle style. The last few that were produced later by Henry G. White (who took over the shop from Israel White's widow in 1846) were the bridle types. This pretty much says that White's non-bridle came out before his bridle.

Why the introduction of the bridle to the three-arm concept? My guess is that the center arm of the original non-bridle model (that connected only to the fence and not to the outside arms) allowed too much play under stress conditions. Israel White must have found this out early on, as it appears that he produced his bridle shortly after 1834. It's very likely that both styles were produced simultaneously as the serial numbers run from low to high on both styles. Of course he may have serialized each style separately, but as yet there is no evidence of that. 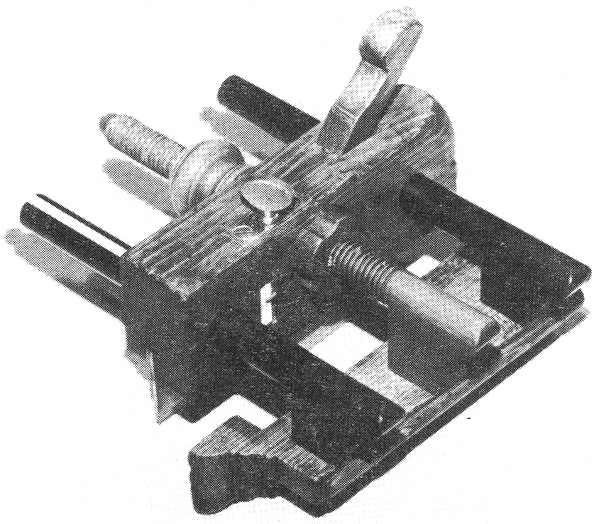 Now the tricky part. If we speculate that Andruss came out with his bridle model first, then why would White choose an unproven, possibly ineffective, non-bridle model as his copy? Those who copied designs tried to stay as close as possible to what had already been proven to work. They might modify a detail or two to "skirt the patent" or to claim an improvement, but they would rarely change an entire concept. Also, as you will read below, the details of each plane give the strong impression that the I. King plane preceded the Andruss. But, if King never got started until after the White plane was out, this would also put the Andruss after the White! If you accept the progression from maker to maker that is detailed below, you will have to give first place to White. 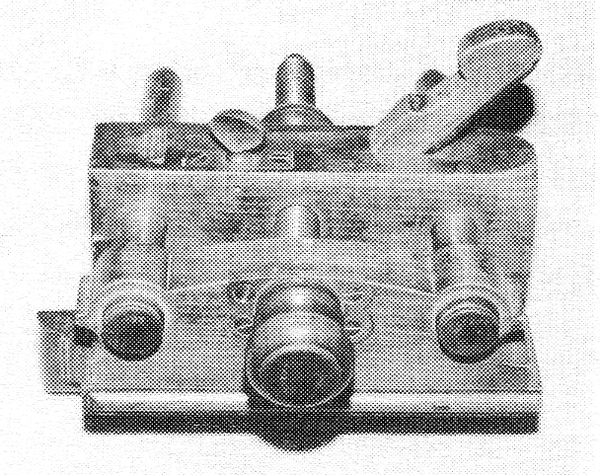 So, if Israel White invented the three-arm plow, then who in New Jersey was the first to copy him? For this we have to look at the planes of I.King, Andruss, and Mockridge & Francis. The one that looks to be "elaborate beyond effectiveness" is the I. King. The handle is unbelievable, with its two iron castings attaching it to the body (hard to see in the photo). The manner of attaching the bridle to the outside arms also requires a casting that could have been made a lot simpler. The bushing that accepts the threaded center arm is elaborately inset into the body. The method of holding everything rigid, once the fence is positioned, is with an iron strip set into the forward arm and a wing screw through the body to clamp down on it. Not bad theoretically, but expensive. 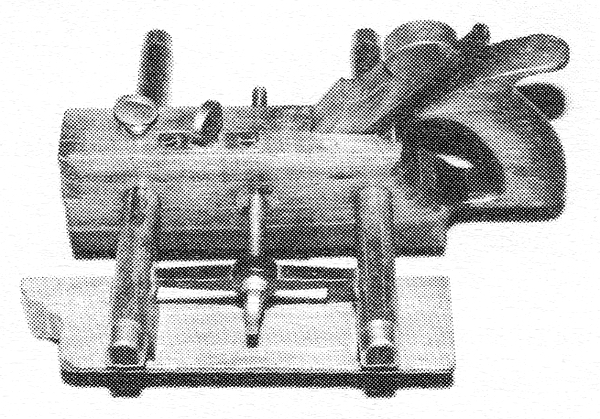 Figure 3. The I. King three-arm.
(Courtesy of Ken Hopfel)

Now look at the Andruss. It lacks the very expensive handle. The bushing sits on top of the body, requiring no inset cutting. A rather nice improvement is riveting through the arms, bridle, and fence all in one shot, giving better rigidity and making the bridle casting much simpler. In short it lacks almost all of the excesses of the King design, which somewhat acts as proof of Andruss following King. 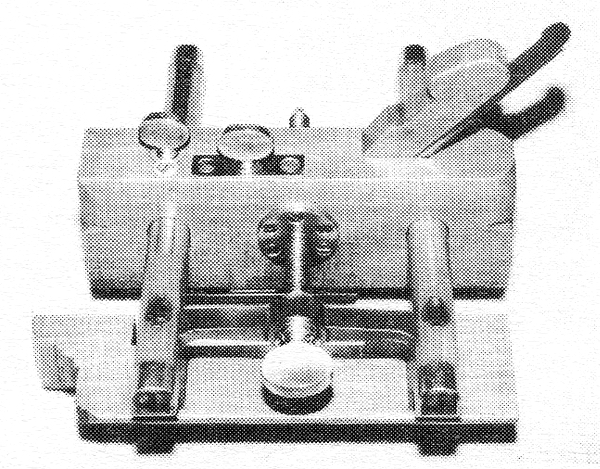 And now look at the Mockridge & Francis plows, the untoted first. It has the Andruss bridle but uses a bulky brass casting, which looks almost like a prototype. (Maybe it is.) Screws were used rather than rivets to attach the arms to the fence. This indicates a natural change in plows, where rivets almost always preceded screws. Mockridge & Francis removed the front arm iron strip and substituted a lock wedge, which was less expensive. The plane pictured in Fig. 5 has a nut on the center arm. This centralizes the locking pressure and puts a portion of it onto the rear arm. It might have come as an afterthought when the single forward wedge wasn't doing the job, particularly when the rear arm started to wear. It can be seen that the simplification continued as Mockridge & Francis took costs out of the Andruss design. 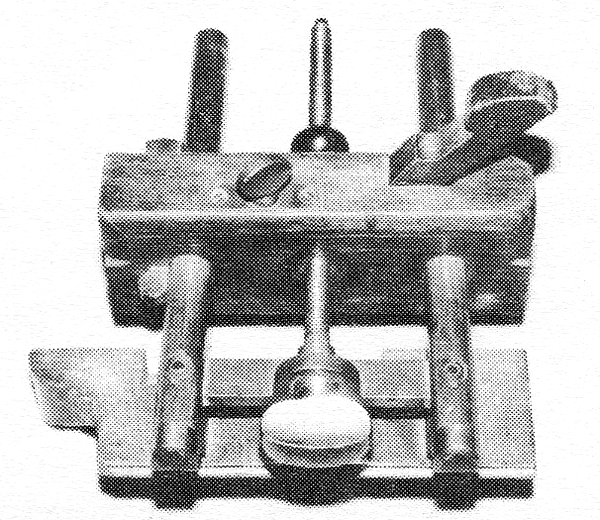 Finally the Mockridge & Francis toted plow. The screws attaching the arms to the fence are no longer screwed through the bridle, as in the untoted model. The arms are now screwed to the fence in the same way as any normal plow. The much simpler steel bridle just sits in the mortises in the arms (a cheaper design). There is no wedge or front arm thumbscrew lock. The fence arms are now mortised into the fence, which helps to keep them square to the fence. The need for mortising indicates that there must have been a problem in keeping the arms square to the fence, the very thing that this bridle concept was supposed to lick. As with the untoted model there is a nut on the center arm, which is the only way to lock the fence setting. As this nut was replaced on this particular plane, it could be questioned whether it was there originally and then lost, or was never there to start with. It's not reasonable for a plow plane to be designed with "state-of-the- art" detail and not have a way to lock the arms. So I think it's safe to consider the locking nut design as original or an early afterthought. It would appear that in some areas the simplification went a little too far in this final design. That was probably its death knell. 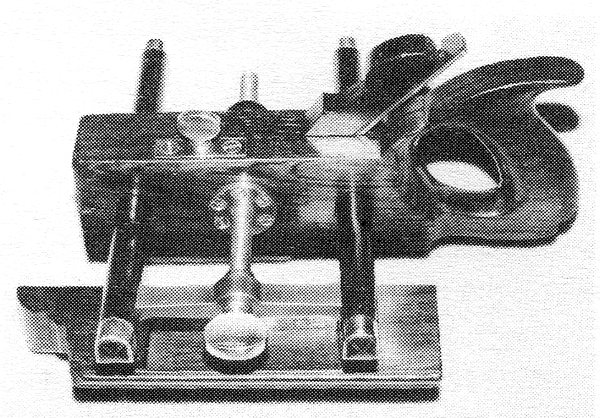 So there it is: the White three-arm, non-bridle plow, then the White bridle, then the King, then the Andruss, then the Mockridge & Francis untoted, and finally the Mockridge & Francis toted. It's interesting to note that almost every change down through time, and from one maker to another seemed to reflect a need to simplify a costly design. There were some changes that addressed a possible ineffectiveness, but they were not as plentiful as those concerning cost.

I. King was only in business for two years after 1835 and Andruss only survived 5 or 6 years after his three-arm came out. Today very few of these planes are extant: one by I.King, 2 or 3 by Andruss, less than a dozen by Mockridge & Francis, and a dozen or so by White. The bottom line for these early three-arm plows is that they didn't seem to be worth the extra cost, as their advantage was slight, if at all. Most ineffective products usually end up being the rarest pieces in any collection. The early three-arm plows fit that bill perfectly.