by Donald B. Johnstone
Originally published in The Tool Shed, Number 96 (April 1997)

In my article on bevels in the November 1996 Tool Shed I described several versions of the standard carpenter's bevel. In this article I will cover two types of combination tools that can function as either a try square or a bevel. The first is the combination try square and bevel that has a fixed square blade in combination with an adjustable bevel blade. The second is the adjustable bevel that can be set conveniently at a 90 degree angle for use as a try square, but its use for this purpose would have been peripheral to its primary purpose as a bevel. With the second type the square is just one of the bevel settings. There are so many of both types that this article can only describe a few of the better-known ones. Also, there were combination tools and adjustable bevels that were designed for framing, such as the Topp's framing square, but these are not included in this article.

Jonas Halsted and Cornelius J. Ackerman of New York were issued a patent entitled "Carpenter's Miter and Bevel Square" on June 26, 1855. "The patentees claim to have invented a new and useful improvement for carpenters and jointers - to be used for forming the joints of window and door casings." Photo 1 shows an example in brass and steel bearing the patentees' names and the patent date. The bevel blade is retractable, and fits conveniently in a slot in the stock. The pivot rivet is sufficiently tight to enable the bevel blade to be positioned for use. 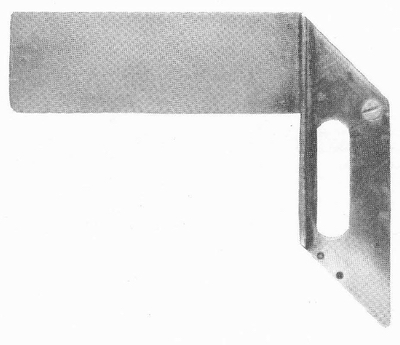 Just two years later Alexander McKenzie of Boston was issued a patent on April 21, 1857 entitled "Improvement in Combined Square, Miter Square and Bevel." It was manufactured by Stackpole and Mulliken of Boston. It differs from the Halsted and Ackerman design only by the inclusion of a semicircular slot with a graduated scale on the brass stock. The slot enables a setscrew attached to an extension of the bevel blade to slide freely through the slot as the blade is adjusted. The unusual markings along the scale are not degrees, as normally seen on a protractor. Instead, there are the figures 4, 5, 6, 7, and 8 along the slot at varying distances from one another. When the blade is set parallel to the slanted top of the stock, it forms a 45 degree angle with the edge of the stock, and the reading on the scale is 4. The patent description indicates this 45 degree angle as the miter for a 4-sided figure, hence the designation 4 on the scale. Likewise, the marking 5 indicates the angle for the miter of a 5-sided figure. Numbers 6, 7, and 8 are for the miters of similar polygons. (We usually think of miter joints as being 45 degrees and forming a right angle when put together, but by definition miter joints can be one-half of any specified angle.)

The Stanley Rule and Level Company produced a patented combination square and bevel even before their first patented bevel. George A. Shelley of Madison, Connecticut, was issued this patent under the title "Improvement in Square and Bevel Combined" on April 5, 1864. It employed the same protruding wing nut that was used on their early bevels.

The tool was first advertised in the Stanley 1864 catalog, and last appeared in the 1866 catalog, where it was offered in 4, 6, and 8 inch sizes. Photo 2a shows that the tool does not have a slot in the blade. The scarcity of this bevel today undoubtedly reflects how poorly received they were by the craftsmen of the day, and why Stanley soon began producing them with the more convenient slot-in-the-blade design in 1867. 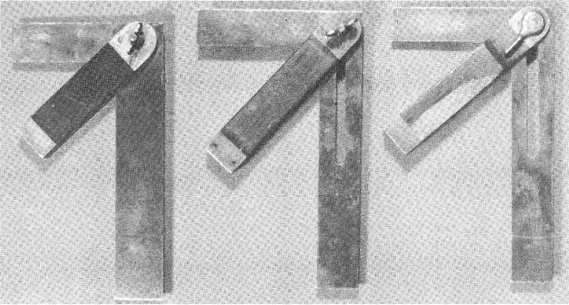 Another tool with an adjustable bevel blade and a fixed try square blade was patented on August 19, 1884, by Frederick W. Ritchie of Vanceborough, Maine. Its patent is entitled "Combination Tool." Photo 3 is of a fine example of this very well-made and handsome tool in rosewood and German silver. Plumb and level are built into the stock and have sliding covers for their protection. The blades are of steel with deliniations on the try square blade. The patent date is stamped, but there is no evidence as to who the manufacturer was. 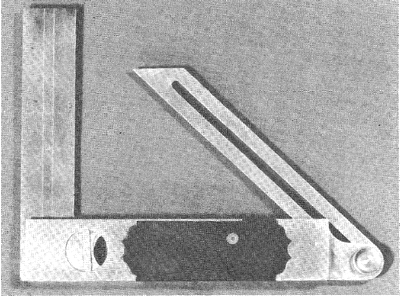 On August 11, 1885, Leonard D. Howard of St. Johnsbury, Vermont, was issued a patent for his "Combined Try Square and Bevel." He is the same inventor who, years before, had patented two other bevel designs, one of which resulted in the production of the very fine recessed pivot-locking bevels discussed in the November 1996 Tool Shed. The patent drawing 1 indicates it was to be an all-metal adjustable sliding bevel with a second blade that was to ride in a groove at a right angle to the stock. Both blades were to be slotted. The right angle blade arrangement was similar to what was subsequently offered by Stanley as their No. 14 adjustable try square. The sketch also shows a spirit level in the stock. Whether or not this design was ever manufactured is not known to me. 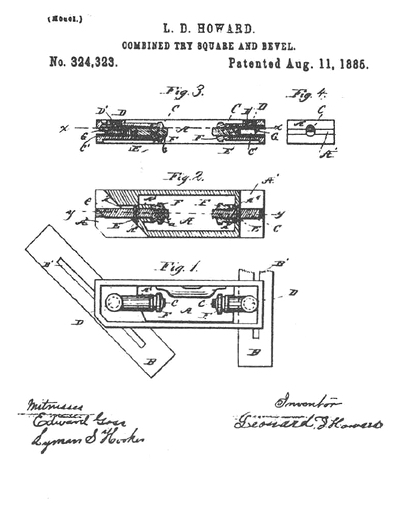 An unusual bevel which received advertising and editorials in the 1889-90 issues of Carpentry and Building was the "Combined Try Square and Device for Laying Out Angles" for which Philo L. Fox of Bridgeport, Connecticut, was issued a patent on October 2, 1888. See patent drawing 2. It was manufactured and sold as the "Fox Try and Bevel Square" by the Hill Bevel Company of Manchester, Connecticut. Essentially it is a try square with a bevel attachment. The latter is a sliding bar pivoted on the back edge of the stock which is marked for pitches from seven to nine inches. The patent claim is for a "try square which shall be especially adapted to the laying out of angles as for example, roof pitches." 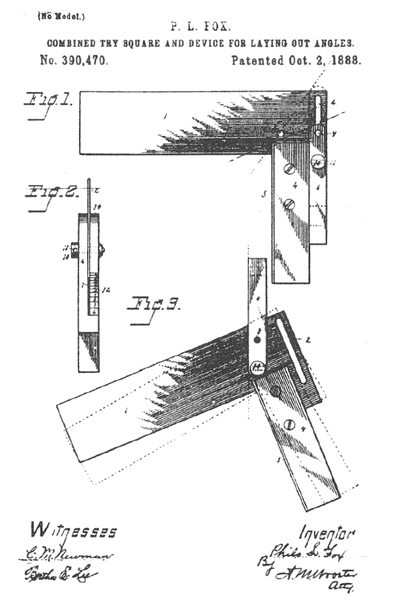 Adjustable Bevels With A Square Setting

Merriweather J. Thompson of St. Louis, Missouri, was issued a patent on October 12, 1858 for an "Improved Rule for Describing Polygonal Forms." Strangely, it was filed by the Patent Office under the "Mathematical Instruments" section rather than under "Carpentry and Building," presumably because of the title. Thompson, however, described its occasional use as a try square or miter square and bevel. See Photo 4. It was similar in construction to the Fisher bevel which follows. An excellent discussion of this tool by Roger Smith appeared in the Gristmill No. 47, page 13, 1987. 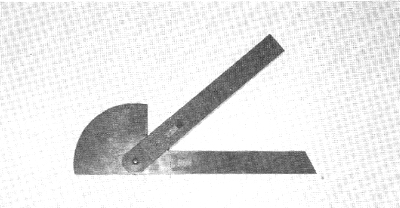 W. T. Fisher of Lenoir's, Tennessee, was issued a patent for his invention, "Improvement in Bevel Squares," on June 23, 1868. This instrument, illustrated in Photo 5, was manufactured and sold by Disston and Morss of Philadelphia. It was well made and very attractive, with a stock of rosewood, a brass protractor, spirit level, and blued steel blade. The patent describes it as "... combining within itself many of the separate tools now necessarily used in every work-shop such as a bevel-square, right-angle square, plumb and level ... ." The Thompson and Fisher bevels, the Ritchie try square and bevel, and the Witter bevel described below command high prices when they infrequently appear at auction. 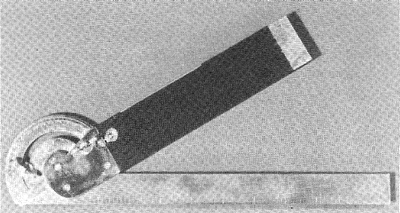 Another tool that meets the criterion of a bevel that serves as a try square was patented by James Duckworth and Eli Smith of Springfield, Massachusetts. They were issued a patent for their "Combined Protractor, Square and Bevel" on August 14, 1883. It was for a butt-locking, all-metal bevel with a unique feature which enabled the blade to be set at 90 degrees to the stock. See patent drawing 3. A groove was milled into the blade lengthwise, and a pair of teeth within the stock, when activated by a brass thumb slide, could be made to engage the groove. Degree graduations were marked on a brass cylinder at the pivot end of an unusually heavy iron stock. 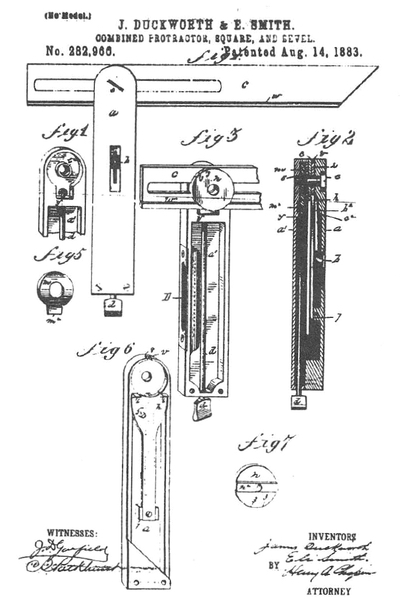 The Witter bevel is shown in Photo 6. It is one of the more unique adjustable bevels, with two blades and unusual pivot screws for tightening them. It was patented on February 22, 1887 by Frank Ellsworth Witter of Canterbury, Connecticut. In addition to two steel blades, one of which is longer and slotted, the tool comprises brass plates, a rosewood infill, and two recessed brass circular thumb nuts. Etched lines on the brass plate enable the user to set the shorter blade at three different positions, namely for an octagon, a square miter, and a try square cut. The patent description also suggests its use for cutting hips, valleys, jack-rafters, and that class of work as the blade could also be set at any other desired angles. The edge of the circular thumb nuts protruded just enough from the ends of the bevel that they could be tightened with one thumb. One of two examples from my collection is marked on the wood with the inventor's name, the U.S. patent date, and a Canadian patent date of August 13, 1887. The other example has no such markings. The tools were sold as "Witter's Improved Bevel" and were manufactured by a firm one would not associate with carpenter's tools: the Acme Button-Hole Attachment Co. of New York. 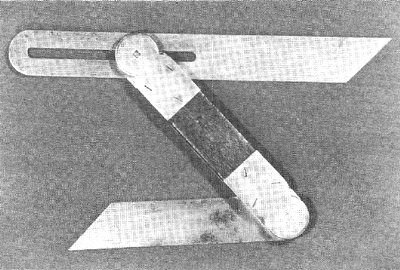 Frank Houle of Chicago was issued a patent for a "Try Square" on December 11, 1894. As shown in patent drawing 4, it consists of a slotted stock and a steel blade with a furcated (forked) slot. This enables a person to set the blade at various angles in addition to a right angle, and it can be fixed in one position by a bolt and wing nut. Only one size has been observed. 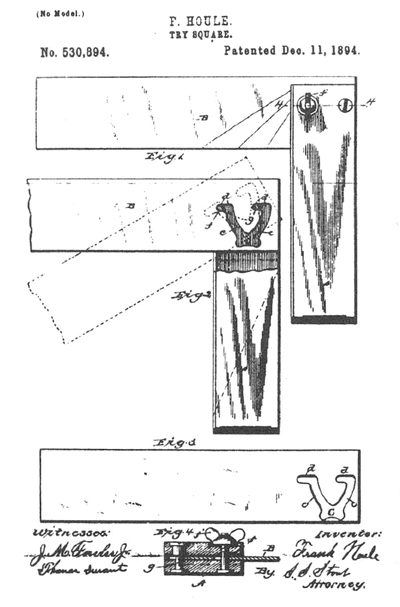 Joseph E Gagnon of Philadelphia and John A. Hawthorne, Jr. of Chester, Pennsylvania were issued a patent for a "Plumb, Level, and Square" on February 13, 1917. They assigned one-third of their patent to A.S. Orchard of Philadelphia. The tool was constructed entirely of steel, and would indeed serve well as a try square and bevel. Its use as a bevel would be enhanced by its convenient protractor. See Photo 7.