There are times when the complexity of a situation reaches a point where it appears as if only a genius or a space-age computer could handle it. It is times like these when I have felt that perhaps the brain of mere man, by itself, is not enough to function in our high-tech world. But something always drags me back in time to point out how yesterday's "mere man" was able to solve problems that today's sophisticated intelligentsia find formidable: sailing ships, pyramids, Stonehenge, and the like. Some of these techniques still impress our scientists. How did they do it centuries ago?

Most of the answers are known, or speculated at, and most make good sense. But every now and then, something comes along that piques our curiosity, sometimes to the point of embarrassment. We wonder how anyone without our elaborate education and equipment could do the things that they did. An example, although never thought of as anything except a common utilitarian item, is the barrel.

The concept of the barrel can be seen in drawings as far back as the Egyptians. With their intelligence it is easy to understand how they progressed from hollowed-out tree sections to staves forced together with wooden hoops. However, these vessels were only tapered tubs and buckets and did not incorporate the "belly" of the later Roman barrels.

The purpose of the belly is obvious to anyone who has ever rolled a barrel. A bellied barrel can be easily rolled and turned due to the small surface area contacting the ground. It does away with the conical bucket-type vessel that doesn't roll in a straight line. There are other advantages: additional strength provided by the arch affect, the ability to drive the hoops from both ends (a perfect cylinder without a belly would not allow the hoops to be driven), and the ease of tilting the barrel upright from its horizontal position.

But nothing is more puzzling than how this belly was accomplished, keeping in mind the two main criteria of a "wet" barrel: 1) it must not leak, and 2) it must hold a rather exact amount of liquid.

The skill of preventing the barrel from leaking requires an explanation that must be reserved for a more lengthy article. As such, this technique will be postponed to another time. The subject of this article is: how could men without any education (many could not even sign their names) and without power tools of any kind, maintain an almost unbelievable accuracy relating to the volume of the barrel.

Kenneth Kilby, in his book The Cooper and His Trade, describes a simple tool that he calls diagonals. Most are merely two pointed sticks bolted together at their ends so as to pivot. They look exactly like a pair of primitive dividers, see Figure 1. But this is where the similarity ends. The tool (it is really a gauge) is placed in the already formed barrel that has its bottom in place, see Figure 2. One tip is placed at the junction of the stave and the bottom, the pivot joint is rested against the belly, and the remaining tip indicates the level where the groove for the lid should be cut. 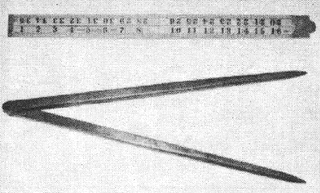 Figure 1. A cooper's diagonals for a 14 gallon barrel. 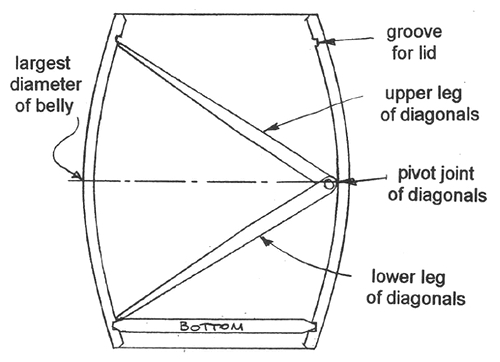 Using the diagonals as a guide, an experienced cooper can adjust tile position of the top croze groove in order to yield the capacity required, (within allowable limits). And it can be proven with some calculus, geometry and computer work. The downside is that it is necessary to have a diagonal for each size barrel. Although I'm only guessing, I'd say that the Master Cooper made his set of diagonals using finished barrels that were already checked for capacity. Kind of a backward approach, but nevertheless a perfectly accurate way to do things. Trial-and-error is the antithesis of a calculated design, and although sometimes more time consuming, it is usually deadly accurate.

You will rarely see these diagonals for sale, most likely because of the ease of misinterpreting the wooden ones as worthless. (The English did have a few that were all metal). Such aids as templates and diagonals were probably used only by apprentices, and discarded when experience proved them unnecessary.

With a little study, it can easily be seen why this simple gauge works. If the barrel is bellied-out too much, the pivot joint of the gauge will touch lower in the barrel, and therefore the tip of the upper leg of the gauge will also touch lower. This gives a lower height to the "containing" portion of the barrel (the space between the bottom and the lid), and offsets the increase in diameter created by the oversized belly. If the belly was too "flat" (tending toward cylindrical) the opposite correction would occur. Overly simplistic? To prove it, spend a few days on the calculations or call a math professor at Stevens or MIT. (Jack Whelan did the math for me.)

I have mixed emotions about disclosing this railier simple trick for an otherwise mind-boggling operation. I feel information about tools should be disseminated if we are to have iliem elevated to their proper level. But if I keep doing this, I won't have any jaw-dropping stories left when I give my barrel-making demonstrations. On second thought, coopering has so many colorful and interesting vignettes of man's ability to conquer complexity with minimal equipment, that I don't think I will ever run out of these stories.