By Dale Butterworth & Bob Garay
Originally published in The Tool Shed, Number 119 (November 2001)
Since the first sawmill was built in the United States, over 100 log rules have been developed, using a variety of methods. A round log, generally, must be made into square or rectangular pieces to be able to determine product value. Before the Civil War the term “surveying” was used to determine the measurement of lumber, but the modern term "scaling" has been substituted because the other word might be confused with the measurement of land. Log rules are specially calibrated sticks, resembling yardsticks, by which the number of board feet that may be sawed from a log can be calculated by measuring first the length of the log and then the diameter of the log. Some log rules were based upon tallies of individual mills; others were developed by diagramming the cross section of boards in the ends of logs, while still others were developed using mathematical formulas. In general, log rules must account for: the taper that exists in the log, saw kerf (or the loss of wood as sawdust), and a fixed procedure for removing wood on the outside of logs for slabs.
Today, volume tables based on three principal log rules are used in the United States: the Doyle, the Scribner, and the International 1/4" rules. To assist the scaler with the accuracy required by this task, log rules were later made with caliper arms to measure the diameter of the log. Another addition starting in the 1900's was the addition of a spoked wheel to measure a log's length.

This is a Maine state octagon-shaped Saco Rule with round head brass tacks at the 100 foot mark.

The Doyle Log Rule, developed around 1825, is based on a mathematical formula and is widely used throughout the southern United States. This rule allows for a saw kerf of 5/16 inch and a slabbing allowance of 4 inches. Because of this, the Doyle Rule is somewhat inconsistent, as it underestimates small logs and overestimates long logs. The Scribner Log Rule , developed around 1846, is a good example of a diagram rule. It was created by drawing the cross section of 1-inch boards within circles representing the end view of logs. A space of 1/4 inch was left between the boards to account for saw kerf. The Scribner Rule does not have an allowance for log taper and generally underestimates logs, particularly in the longer logs. 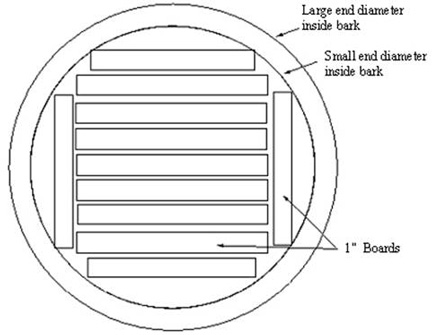 Cross section of log end used for a diagram rule, where each board is one-inch thick with 1/4 inch allowance for kerf.

This marking gauge has three points to scribe the lines on a log rule.

In Maine, the first recorded evidence of a log rule is attributed to Norton of Bangor, Maine who was probably making them prior to 1842. According to the Bangor business directories he was a cabinet maker and rule maker. His scale was based on the diagram method laying out one-inch boards with a minimum width of six-inches and with 1/4 inch allowance for kerf. Taper was ignored except for boards longer than 20 feet, which they had to measure as two logs. About this same time Charles T. Holland, who was also a cabinet maker in Bangor, started to make log rules of the same type as Norton's. He perfected the scale and it became so popular that by 1856 the Holland Rule had become known as the Bangor or Maine rule. This caused a little confusion, as there was actually another Bangor rule with a different scale than those found on the Holland rule. The Maine rule differs from the Scribner rule (also made by diagrams) in only one respect. The Maine rule assumes that sawing will occur "around" the log while the Scribner Rule is based on sawing "through" the log as shown in the cross section diagram. All of the log rules made in Maine were made of maple wood cut from the "cant" or north side of the mountain. Because of their slow growth it contributed to a tight stable grain. In 1861 the legislature prescribed the use of the Norton or Holland rule for areas around the Penobscot waters.

Two Holland log rules made by A.B. French. The top one is a three-foot long flat rectangular shape. It was made later in his career as shorter wood lengths were cut. The bottom rule has the initials M.S.P. CO. for the Maine Seaboard Paper Co. The initials F.B.M. stands for feet board measure

There were other log rule makers; with different scales, all developing about the same time as the Holland rule. One was the Saco River Rule. No information is available on who made them. They are beautiful octagon-shaped rules with round-headed brass tacks that spiral around at the 50-foot marks. Another maker by the name of Charles Parsons used a similar octagon design with flat-headed brass tacks. He lived in New Hampshire just over the Maine border by the Saco River. I.F. Neeley from Elliot, Maine (near Portsmouth, New Hampshire) also made nice log rules with calipers using the Holland scale.

An important Maine Log rule maker was Valentine Fabian. He was also a cabinetmaker in Bangor and bought out the Holland rule business about 1900. He moved to Milo, Maine and made log rules for over thirty years. In all he made over two hundred different types of rules. About 1900 he started to make a caliper for his log rules. These calipers were much smaller than the New Hampshire type, probably hoping not to be as cumbersome to handle. The early calipers Fabian made in Orenville had just one screw securing the upper caliper arm to the rule. Later in Milo he used two screws to help the rigidity of the caliper. These rules were marked V. Fabian & Son. After his dad died they were marked V. Fabians Son. After he took over his fathers business he moved from Orenville, Maine to across the river to Derby, Maine. Log rules with these marks are rare. 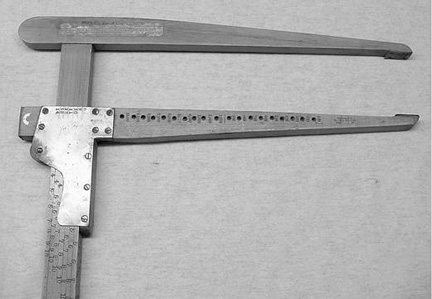 Log rule caliper made by V. Fabian. Note the brass plates on the inside ends of the arms required by law. This example also has a paper label on the upper arm with instructions for use.

Another 20th-century maker was Ashton Blaine French, a scaler for the Great Northern Paper Company. Starting with the company in 1919 he was assigned a desk job for the company in Bangor, Maine and in 1930 he started to make log rules. His log rules used the Holland scale, as it was the designated state scale. He sold log rules to the Maine State Paper Co. and the Snow & Neally Co. Some of his work was not marked but can be identified by the brass end cap, which has a small hole in the end to hang it while the finish dries. By the end of his career he made shorter length rules and flat rectangular rules, as the logs were cut shorter for the mills and a 36-inch rule was sufficient for the scales.
Log calipers were used to measure the diameter of the log. Some rules were designed for middle of the log measurement and others for small end measurement. They were made of maple wood with the straightest grain. By law they had to have metal tips on the end of the jaws so wear would not cause a false calculation. They often had tally holes on the side of the lower jaw where the scaler could place small wooden pegs to keep track of his total footage calculated. Sometimes they had small wheels to assist the lower jaw in freely sliding up and down the log rule.

French added a metal bracket to strengthen the upper jaw of the caliper. They often had an adjustable piece that rode against the log rule to keep it true and square so the calibration would not be off. Fabian's design was very simple as he was a frugal man and wanted to keep his costs down. An economy log rule caliper was only $1.25 in the 1920's. 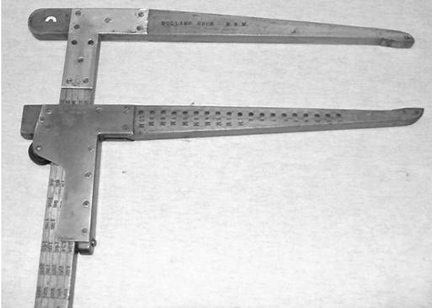 Log caliper & rule by A.B. French of Hampden Highland, Maine. Note the tally holes on lower arm. This one has a wheel behind the rule to assist with easy movement. At the lower section of the bottom arm support is an adjusting screw to keep the caliper arm at the proper right angle.

Spoked wheels were added to the log rule to increase the accuracy and ease of measuring the length of a log. In Maine they were usually a "five-foot wheel" with ten spokes. One spoke was weighted with a lead weight to start the wheel off. The spoke tips are six inches apart so every other spoke is one foot and one revolution is five feet. It was used by starting at one end of a log and rolling it down the log. The two measurements, diameter and length, would allow the scaler to read off the total board footage. C.W. Grover from Caratunk, was one of the main wheel makers in Maine. When he died in 1945 this ended the log rule wheel business in Maine. Grover also made a four-foot wheel in the 1940's but they are scarce and rarely found. In 1945 Grover made a simple version of a wheel with round dowels on a wood hub. These are marked C.W. Grover Pleasant Pond, Maine, which is where his home and shop was located just up the hill from Caratunk. All his five-foot wheels are marked Caratunk. He uses very small weights and it is rare to find one with a plumb-bob shaped weight. 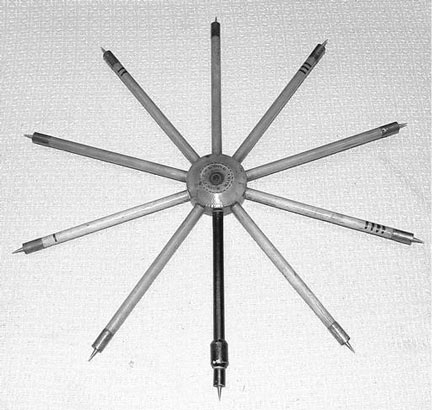 Grover made a simple version of the wheel using round dowels and a wood hub. 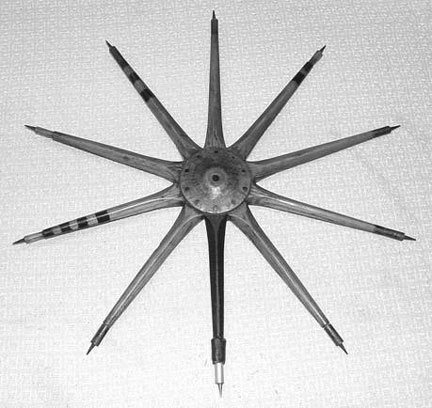 Grover five-foot wheel. Note the painted lead weight and the bands on the spokes to help keep track of revolutions. 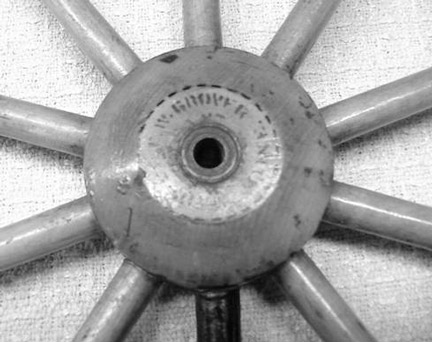 The name C.W. GROVER, PLEASANT POND, MAINE, can be read from this wooden hub.

After the 1940's the paper industry switched to pulp wood. This is a short four-foot long bolt that goes into a pulp digester machine. The classic log rules became tools of the past. During the 1950's it is said that the paper companies had rooms filled with log calipers and spoked wheels. There are even stories of truckloads of these beautiful tools taken to the dump. With the paper industry crying the blues today about expenses, I bet they wish they still had rooms full of these very sought after collectible tools of the past.