Why I Have Nine Carpenter's Gauges

Three years ago a collecting friend visited my basement tool room. After browsing about he asked, "Where are your marking gauges?" Well I replied, "I don't have any; they don't fit into what I collect." There followed a lecture on the pitfalls of not diversifying a tool collection. After he left me totally depressed, I decided to do a little research on gauges, and to select a few to add to my collection.

But, I broadened my search to carpenter's gauges, which include marking, mortising, and butt gauges. After looking at tool books and skimming through old dealer and auction catalogs, I settled on nine patented gauges, all but one having a patent date before 1875. It occurred to me then that when, or if, I could find really good examples of all nine I would write about them in the Tool Shed. Well, with some help from good friends named Blanchard, Donnelly, Kosmerl, Smith, and Steere I have all nine, and here is my article.

My earliest gauge is the Williams "Compound Gauge" that was patented by Albert Williams of Philadelphia on May 26, 1857. The gauge was made between 1859-1879 by the Stanley Rule & Level Co. It was the first patented tool of any kind that Stanley made. In the 1867 catalog it was the top-of-the-line gauge of the 21 available gauges at $22 per dozen, although it was not pictured or given any special mention.

A circular, wooden head had metal faces on both sides. One face was for use when marking metal, and the second face was for use with all other applications. The patent papers did not disclose why you would want different faces for marking wood and metal, or what metals were used for the faces. Two slotted screws were provided to adjust the gauge as was common in England, but uncommon in the U.S. where thumbscrews were standard. One screw held the head in place on the stem, and the other, located on the far end of the stem, positioned the mortising point on the stem.

My Williams patent gauge is shown in Photo 1. It's different from the gauge in the patent drawing in two ways. More convenient knurled thumbscrews have been substituted for the two slotted screws, and the head has only one metal face that is of steel. The patent date and the desirable Stanley Rule & Level Co. eagle trademark are stamped on the wood face. 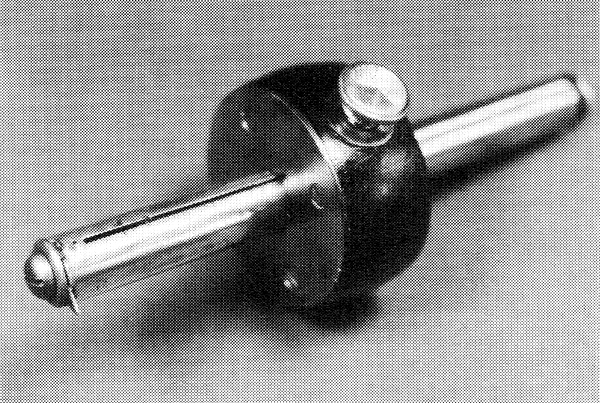 Christian Scholl of Mount Joy, Pennsylvania, patented a joiner's gauge on March 8, 1864. There were two models: one with the stem divided lengthwise into three sections and one with four sections. Each model had a sliding mortise point on one of the sections. The sections passed through the head and were held together when the wooden thumbscrew on the head was tightened to hold the head in place. The sections could be set independently, permitting either three or four settings on one gauge.

Scholl comments in his application, "Experience has taught me the necessity of having three or four separate gauges at hand for certain work. In order to economize the expense, save bench or tool chest space, and the greater convenience of having all in one tool, I was induced to invent this combined gauge." He claimed that there were no other three or four-section gauges, and that was correct. However, Frederick Traut (the father of famed tool inventor Justus Traut) of the Stanley Rule & Level Co. had patented Stanley's double gauge in 1862, and had mentioned in his application the possibility of having more than two sections to the stem of a gauge.

Photo 2 shows two Scholl gauges. The four-section gauge is on the left with four different settings. On the right is a disassembled three-section gauge. You can see the graduations on those sections. 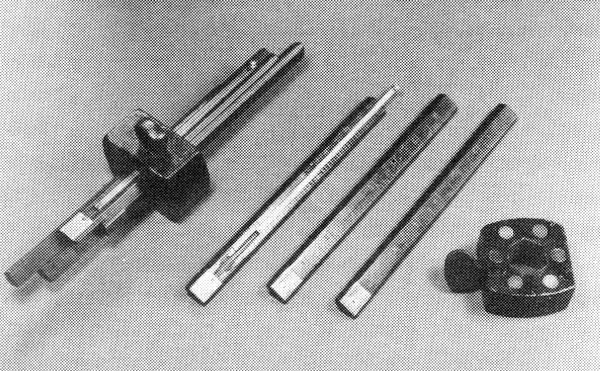 Photo 3 shows the "Double Rail Gauge" patented by Russell Phillips of Gardiner, Maine, on January 15, 1867. The gauge has a wooden stem with grooves cut into both sides to give it an I-beam shape. Thus, the top and bottom of the stem form rails on which there are mounted two cast metal slides (mine are brass) that serve as fences for marking. The two opposing slides can pass each other without touching, which allows them to be set wherever wanted on the stem. Phillips' idea was that with two slides and two points, both the width and thickness of a piece of stock could be marked with one gauge. In effect, Phillips has provided two slides in lieu of the already patented, two-section stem, and this was the basis for his patent. This gauge is marked with the patent date only. 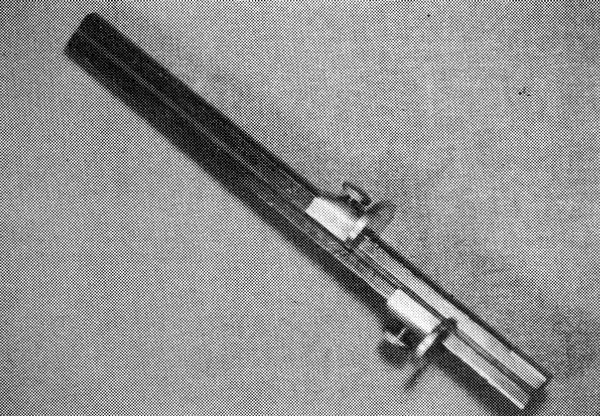 The A.H. Blaisdell gauge, the most complicated gauge of all time, was designed to mark along either straight or curved edges. The curves could be convex or concave, regular or irregular. Blaisdell, from Newton Corners, Massachusetts, received his patent on June 23, 1868. Nelson Ames of Hartford, Connecticut, had patented a gauge to mark along curved surfaces a year earlier. Ames' gauge had a flat head with a convex curve on one side and a concave curve on the opposite side (and two straight sides). The head could be rotated to place any of these sides against the work.

A side view of Blaisdell's gauge is shown in Photo 4, and a bottom view in Photo 5. Referring to Photo 4, I will call the sliding device with top and bottom thumbscrews the "clamp" and the sliding wooden block to the left the "head." (Blaisdell called them the "adjustable block" and the "sliding block" respectively.) The top thumbscrew positions the clamp along the stem. The bottom thumbscrew fixes the head's position relative to the clamp for use in marking straight work. For curved work this thumbscrew is not tightened, and the head is free to float. The top thumbscrew is marked with Blaisdell' s name and the patent date. 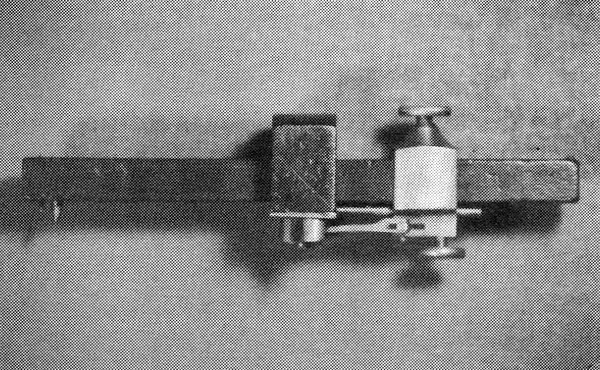 The top surface of Blaisdell's stem was used as a conventional marking or mortise gauge with straight work (with the head fixed to the clamp). You can't tell from the photos, but there is a brass mortise slide along the top of the stem. 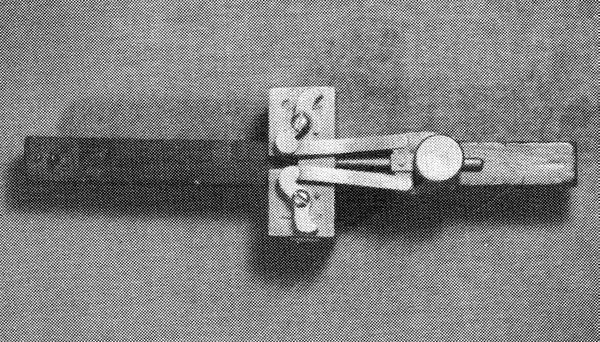 For curved work the head is allowed to float on the stem, which also allows the two wing-shaped fingers on the bottom of the head to move freely against the work. The two ends of each finger must remain in contact with the curved edge of the work when marking. To operate the gauge on curved edges:

In this way the four ends of the fingers will remain in contact with the work and follow any reasonable curve. It's real tricky to maintain this contact, but I've tried it on a number of curved edges and it does work!

Daniel Webster Simmons of Lynn, Massachusetts, patented his carpenter's gauge on May 30, 1871. See Photo 6. It's usually marked with the patent date but not his name or a maker. As you can see, its distinguishing feature is that in lieu of a marking point Simmons has applied a circular scorer, or disk knife, to the end of the stem. This cutter revolves in use which maintains its edge longer, and, as the application states, "is not liable to become heated when in use, so as to draw its temper." (When was the last time you overheated your marking gauge?) 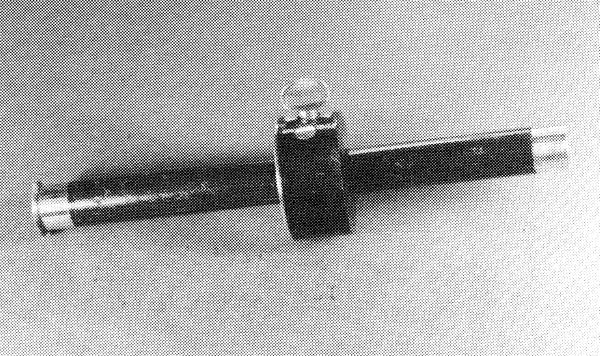 Sixteen years earlier, Francis Hart of Chandlersville, Pennsylvania, had patented a gauge with two rotating cutters that could be used for either marking or mortising. Simmons acknowledges this in his patent application, but differentiates his gauge from Hart's because the bevel on his cutter 's edge slopes toward the head, and because his gauge has no projection beyond the cutter permitting it to be used in a rebate. (Hart's gauge had a nut projecting beyond the cutter.)

Photo 7 shows the top view, and Photo 8 shows the bottom view, of an unmarked gauge that is generally attributed to John Marden of Veazie, Maine. He patented a gauge on April 16, 1872 whose primary function was to mark the position of hinges on doors and rebated jambs. The gauge pictured here appears to serve the same primary function, but is significantly different from the gauge depicted on Marden's patent application. The gauge patented had no rabbeting plate and thumbscrew on top of the stem in front of the head, and the bottom slide was fastened to the head (rather than passing through it) thus keeping the front point at a fixed distance from the head. 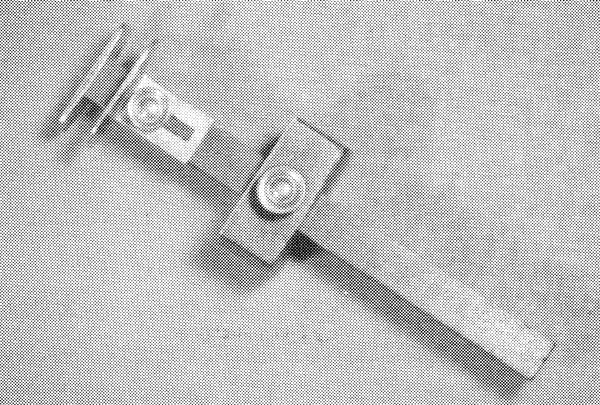 The gauge Marden patented is pictured in Vol. II of Ken Robert's Wooden Planes in 19th Century America on page 355 (thanks to John Wells for this), as are variations of the gauge, but we can't tell if the gauge pictured here is among them. Marden gauges were made by Chapin at the Union Factory in Hartford. My gauge has appeared in catalogs and auctions as the Marden patent gauge, but they always seem to be unmarked. But then, changes in tools after they are patented are not uncommon. It's also vexing that the patentee's name has appeared as both Marden and Marsden. 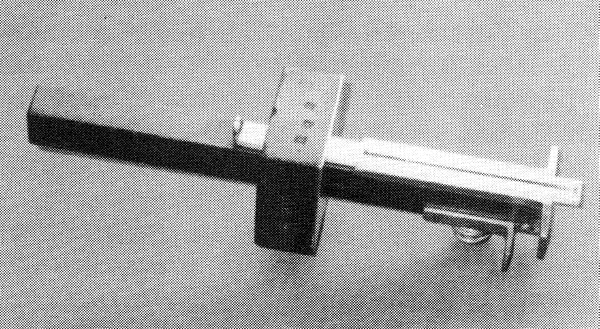 The Stanley Rule and Level Company's No. 60 iron marking and cutting gauge was the design patent granted to Justus Traut on May 12, 1874. See Photo 9. The gauge is unmarked. It has Traut's adjustable point patented August 5, 1873 (the adjusting screw is not visible in the photo, but the slit in the stem is). The stem is a T-shaped bar on which the head rests and slides, but does not engage. The head and stem are coupled by a grappling clamp that is placed over notches in the head. The clamp has prongs that bear on the underside of the T-bar when it's tightened. 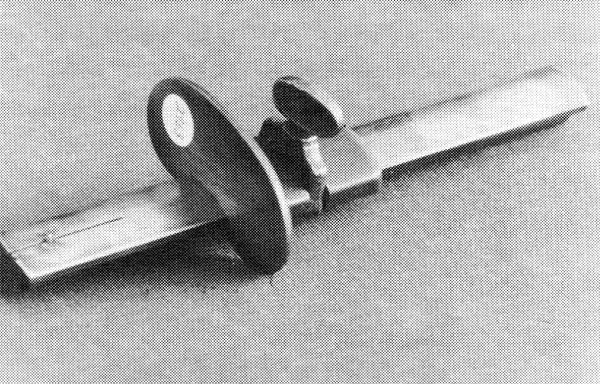 Stanley's No. 60 1/2 gauge is the No. 60 with a reversible, brass mortising slide. The slide can be turned over in the stem to get the mortising point out of the way when not being used. The two gauges were sold from 1874-1897.

Photo 10 shows the Stanley No. 92 "Butt and Rabbet Gauge." Its patent was granted to Justus Traut on August 23, 1892. Some features of this gauge are common to many Stanley gauges, and date back to his October 22, 1872 patent. It was made from 1892-1939. I generally do not collect tools of this century or patented tools with dates after 1875, but this gauge is too beautiful to pass up. Even though it may have been made after I was born, it's my favorite gauge. 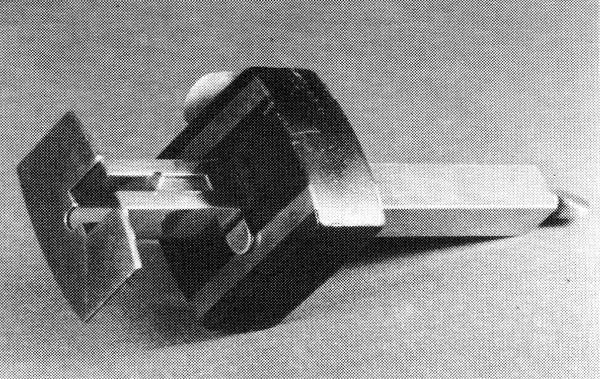 The stem is made of two hollow, square sections of brass, one sliding inside the other. A rabbeting plate is attached at the end of the outer section, and a double cutter is attached at the end of the inner section. The cutter point that is opposite the one you can see is not visible, but the two cutters are formed as one piece and screwed to the end of the inner section. A thumbscrew at the far end of the stem moves the double cutters in the slot behind the rabbeting plate, then through the plate, and then to about 2" in front of the plate.

The gauge is used to mark doors and jambs for hinges as follows:

In closing, I'd like to thank my visitor for initiating my interest in carpenter's gauges which, in turn, led to this article. But, I'm somewhat apprehensive about his next visit. (Photos by Charlie Flynn)