Collected and Described by Greg Welsh (2005)
Rusby Brace Drill
I could not find any information in either of Alex Farnham's books on New Jersey tools nor in Ron Pearson's Patented brace book, which goes only till 1924. Maybe this brace was manufactured after that time. The brace has a couple of innovations that are pretty neat. First, there is a shaft that can be extended from the open work frame to lengthen the reach of the bit. Second, the crank handle can be adjusted via a detent release for greater leverage as required. Both wooden handles can be removed, and the earlier version of this brace had the top handle as part of the casting these tools are marked RUSBY PAT. NEWARK N.J. as cast. 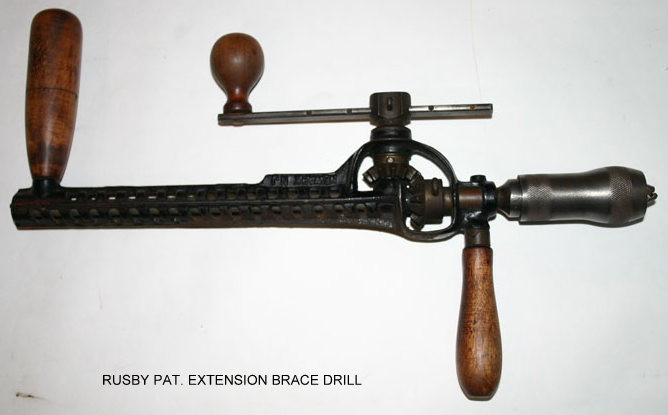 An Unusual Gage Block Plane
A few years ago I attended one of the Brown Auctions and spotted an unusual block plane. I was quite pleased when my bid was the winner at hammer fall. Upon close examination the plane was apparently a low angle block plane, and at, as near as I can measure an angle of 6 degrees, it must be one of the lowest angle block planes ever made. The throat opening measures 5/16 inch. The overall length is 7-1/8 inches, and the width is 2 inches. Underneath the iron the body is stamped with the patent date of Apr. 15, '13.

When I got a copy of the patent papers I saw that it displayed a wooden front knob. Whether the original few planes that appear to exist were offered with the knob or not is purely conjectural. Thinking it would show better I turned one from apple to match the patent illustration. None of the extent planes appear to have ever been finished as the castings are all in a rough condition. No polishing or finish applied. The iron adjustment mechanism is very similar to the wood bottom bench planes made by the Gage Tool Company, Vineland, N.J. 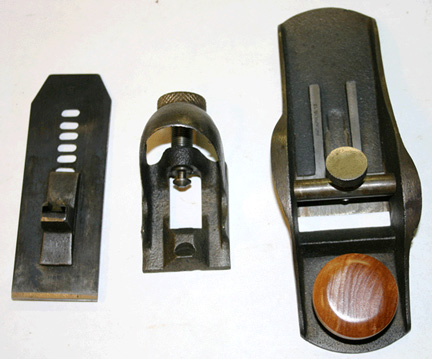 Carl Bopp, who has researched the Gage family, said that this plane was patented in France, England, and Canada as well as the United States. They must have had some big plans for this plane, but they never came to fruition. Why? We will probably never know. Ironically, The exact same model plane was offered the following year at Brown's auction and thankfully sold for a bit more than I had paid the prior year. It made me feel a lot better knowing that I hadn't overbid the year before for my plane. There may be others known to exist, but these two and two others are the only ones known by Carl to have survived.
L. A. Sayre & Company Saw Set
A maker of tools in Newark in the later part of the 19th century. A lathing hammer and dividers are among other tools known to have been made by Sayre & Co. 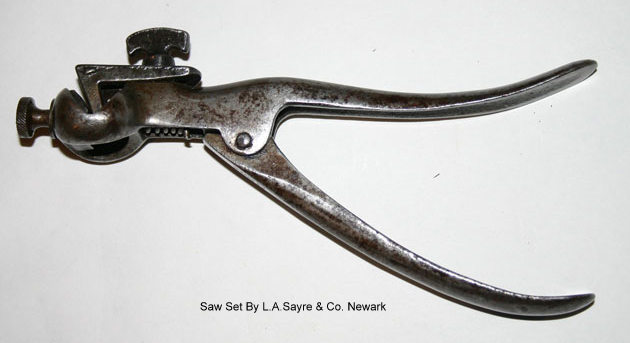 Mockridge & Francis Sash Tool
This tool made by Mockridge and Francis in Newark N.J. was part of a group of sash making tools that I bought at an auction a few years ago. It was used to cope the molding on sash bars where they joined the sash. At the same time I was able to get the sash molding plane that has a matching profile of the curve of the coping tool. All the set is in almost unused condition.

There is a description and additional photos of one of these tools in Alexander Farnham's book "Search for Early New Jersey Toolmakers." M & F were in business from about 1835 through 1869. Many tools made by them are found frequently but these pieces seem rare and unusual. 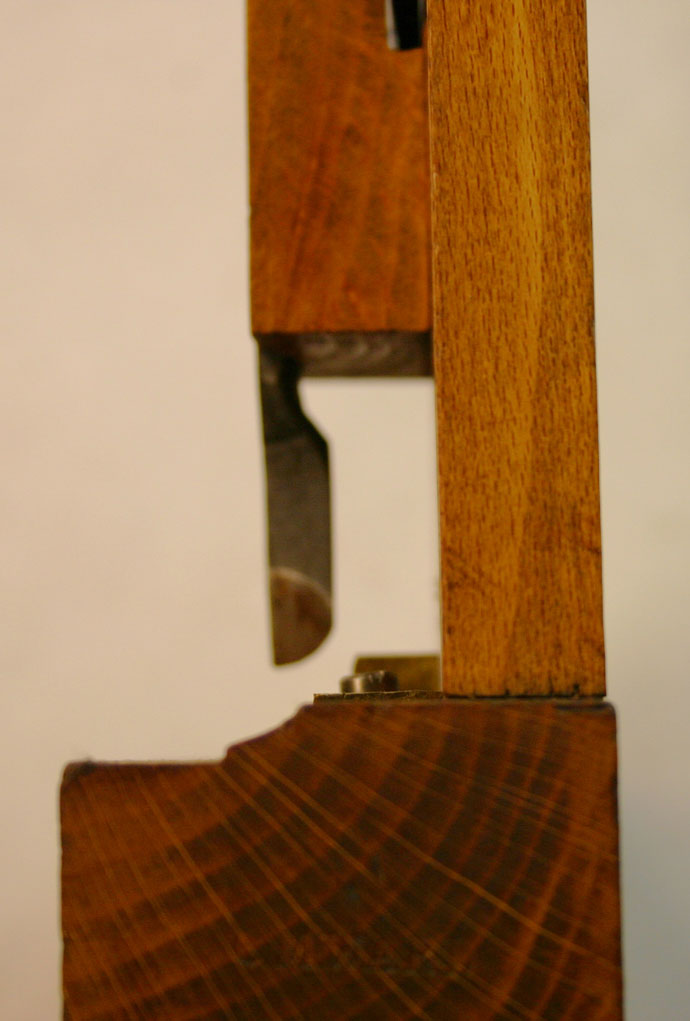 Lowentraut Wrench Brace and Dancing Leg Calipers
Peter Lowentraut made a variety of hand tools. He started in business making tools in 1871, and was making them into the 20th century. He made box scrapers, compasses, hammers, pliers, rasps and probably others. His stamp is P. LOWENTRAUT MFG. CO. / NEWARK, N.J. 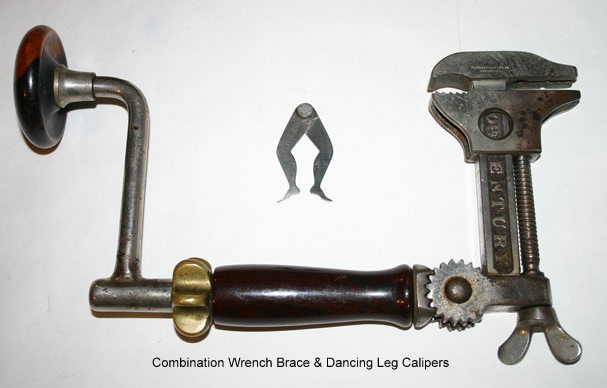 Stephen Jaggers Folding Rule
This ivory rule was made in Newark N.J. by Stephen Jaggers between 1850 and 1860. The hinge plates are a combination of brass and steel. One of the things that I find most appealing is the graceful scroll-like design of the numerals. They are most certainly hand-done and a fine example of scrimshaw work. I know of two other ivory rules by Jaggers -- one in the Newark Museum, the other in a private collection -- amd they both are of the same construction and design as this. I have not seen any others come up for auction or sale anywhere else.